Special Note: “California has completed its pause in processing of initial claims and
has resumed reporting actual unemployment insurance claims data based on their weekly claims
activity. This News Release reflects actual counts for California for the current week and
revisions to the two prior weeks.”

This does not include the 345,440 initial claims for Pandemic Unemployment Assistance (PUA) that was up from 337,228 the previous week. (There are some questions on PUA numbers).

The following graph shows the 4-week moving average of weekly claims since 1971. 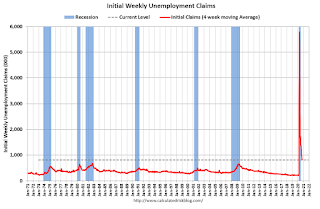 The dashed line on the graph is the current 4-week average. The four-week average of weekly unemployment claims decreased to 811,250.

The previous week was revised down. 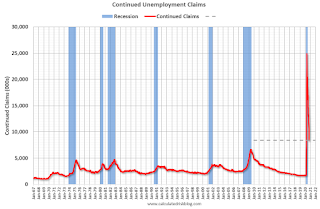 At the worst of the Great Recession, continued claims peaked at 6.635 million, but then steadily declined.

Note: There are an additional 10,232,853 receiving Pandemic Unemployment Assistance (PUA) that decreased from 10,658,673 the previous week (there are questions about these numbers). This is a special program for business owners, self-employed, independent contractors or gig workers not receiving other unemployment insurance.